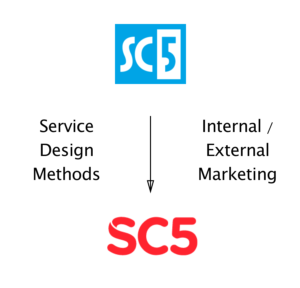 When I started at SC5, the company was a hidden gem. People were doing all kinds of awesome stuff but no-one had communicated it to the world. Also the brand – especially the logo as most used visual element – was engineerish and boring. We also knew that we were in a situation were competition was fierce and we had to find new ways to stay ahead of the game.

There were 70 employees when I started, most of developers and just a few designers. We as a company were also the ones who just implemented others’ plans but we wanted to be the ones who planned too. This would mean a change of strategy and several simultaneous changes in recruitment, client base and ways of working. So the change was both internal and external.

How were service design methods used in this change?

I don’t believe that a brand is credible if employees don’t share its values. So we wanted both to engage people in the change and also find out what SC5ers were thinking of the current state of affairs and the future.

First we carried out a survey of ”SC5 practices”. We asked the employees what were the best and worst of SC5 customs. That way we had a better view of people’s opinions and knew what kind of guidelines the brand would have. SC5 is an exceptional firm in the sense that employees are really opinionated and willing to participate in developing the company.

Next step was to conduct series of workshops with SC5 employees. We asked SC5ers to create mood boards of three different scenarios: what is SC5 now, what they would want it to be in the future and what would be the worst possible outcome. The funny thing is that there were several similar pictures in the worst case scenarios: companies with big parking lots and endless amount of grey-walled cubicles. So we knew that we had the authorization to forget boring things and create a colorful and friendly brand.

I had been coordinating the brand project so far. There was the question of creating the most visible elements of the brands: the visual ones. This is something I did participate only by proposing changes so I did not design anything myself. And of course there were several people participating the overall project, I could not have done my part without the support of my fabulous colleagues.

At the same time new strategy was created. Business model canvas was very useful tool in this phase. We knew who we had been serving, but should there be other client groups as well? Employee mood boards & survey results were helpful when filling business model canvases from different perspectives. In what kind of services did employees see growth potential? Too often strategies are created in management board rooms and employees opinions are forgotten, even though front-line workers are ones who see where the service gaps and possibilities for additional sales are. (If you are interested in reading more about this, read the fantastic book Empolyees First, Customers Second by Vineet Nayar, HCL’s CEO). Also no strategy can be implemented well without engaging employees.

The result in one year was that the design team grew from a few to a 20-head bunch (and overall head count to 90), the client base widened and the turnover grew as well.

What could have been done in a different way?

When I am thinking the whole project afterwards one thing sticks with me. We should have created a customer journey map for our clients and for recruitment purposes as well. We should have also listened the clients more. I was more focused on internal points of view than external. However after reading the aforementioned book Employees First, Customers Second I understood that no company can provide a fantastic service if the employees are not doing well. So in this concept engaging SC5ers with service design methods was a time well spent.